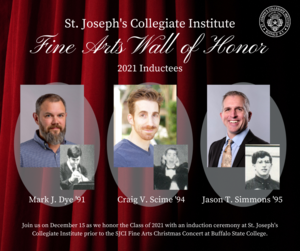 Just a few more days until we induct the Class of 2021 to the SJCI Fine Arts Wall of Honor. Join us for the ceremony on December 15 at St. Joe's, followed by the SJCI Fine Arts Christmas Concert at Rockwell Hall by RSVP'ing here. Learn more about inductees below:

Mark Dye '91 was encouraged creatively at a young age by his parents. At St. Joe’s he learned trumpet, played in Jazz Lab Band, and was yearbook photo staff. He took Studio Art, typically a freshman class, his senior year and won Best in Show at the art show. At Potsdam College, he focused on photography and sculpture. Being photo editor of the student newspaper and interning with the college’s photographer led him to his future in photojournalism. He's documented subjects from the war in Iraq in Baghdad to natural disasters at home and abroad. Shooting professional sports and breaking news for publications such as Reuters Newswire, the (Newark, NJ) Star Ledger, the Niagara Falls Gazette, and many others, Mark has been published all over the world. Mark, his wife, Liz, and beagle, Roxy, live in Manhattan. He is the senior staff photographer at Con Edison, doing documentary photography and some forensic work.

Craig Scime '94 booked his first commercial at age 8. At 10, he got his first paying show, with Desiderio’s Dinner Theater as Tiny Tim for A Christmas Carol. Craig soon met legendary vocal music teacher Jim Deiotte. From then on, he wanted to go where Mr. Deiotte was teaching. At SJCI, Craig was in Glee Club, Swing Choir, and Varsity Singers. He assembled classmates as anchors and crew and began the SJCI Morning News. While at SJCI, he started his first company, Absolute Sound, and went on to produce nationally recognized events from galas to TV and radio commercials for clients like Miss America, Pepsi, and Make-A-Wish. After graduation, Craig majored in TV Production at Medaille College. Before his junior year, he signed his first major deal with Fox to be the host for a new show, “U’s Place.” He also hosted an afternoon radio show on the CP Radio Network. Craig was named the Nation’s Best Kid’s Host and later signed a deal to tour with the NCA and the NDA. He's performed on networks such as FOX, E!, HBO, CBS, and more. Craig now focuses on his company, Clear Star Media, hosting and producing events across the U.S. He recently provided technical assistance to the casting team for the Buffalo-filmed movie Cabrini. Now Craig focuses his energy on being the best dad to his daughters, Gianna and Allegra. He is active in his church, serving as the carnival’s entertainment director and leading the Men's Fellowship Ministry.

Jason Simmons '95 grew up three blocks from St. Joe’s. His father, Allan, taught at SJCI and his time there started long before high school. Whether it be a sporting event or helping his father get ready for the school year, Jason saw firsthand the community and camaraderie of St. Joe’s. Jason was a 3-sport athlete, and was in the Art Program under Mrs. Ward, who was essential in helping him develop the skills and portfolio that led to acceptance into the prestigious architecture school at Syracuse University. His senior year at Syracuse, Jason worked with TRM Architect and fellow alum Matt Moscati ’89 on an award-winning project design. Upon graduation, Jason relocated to the Midwest. In under 3 years, Jason designed 8 real estate offices, an FDIC office, and worked on both Kaufman and Arrowhead Stadiums in Kansas City, MO. Returning to WNY, Jason worked restoring and renovating historic buildings. Notable projects include the Belmont Hotel, North Church, the Frederick Douglass Apartments, Eastman Dental Dispensary, and Holley High School. Some of his new building design includes Rochester’s Voter’s Block and The Gardens at Town Center. In 2018, Jason became a partner at IN/EX Architecture, a firm that works on historic renovations and apartments. Jason’s father retired from the school after 44 years of teaching and his brothers, James ’86 and John ’91, are alums. His wife, Melanie Barnas Simmons (Sacred Heart Class of ’95), was involved in SJCI musicals and the Swing Choir. They have two children, Jacob, 16, and Joseph, 12.