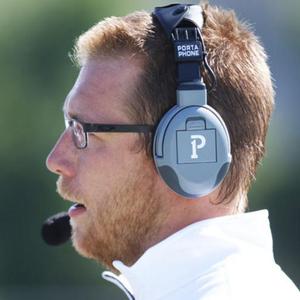 Corona spent the last five years as the head football coach at St. Joseph by-the-Sea High School on Staten Island, N.Y., where he took over a program with 80 players and helped rebuild it to 142 players, with an 8-2 record and a championship game appearance this past season. More importantly, Corona has helped guide numerous players academically, socially and morally, and has seen nearly 99 percent of his graduates go on to college. Corona also taught physical education and was the assistant wrestling coach at St. Joseph.

“Coach Corona is the perfect fit for our program,” said St. Joe’s Athletic Director Brian Anken. “Our hiring committee identified the importance of having someone with significant head coaching experience. We’re really excited to bring in a high-caliber coach who is a proven recruiter and program builder with a long-term vision.”

Prior to coaching at St. Joseph, Corona was offensive coordinator at Bishop O’Connell High School in Arlington, VA. In his three years there, the Knights went from numerous consecutive losing seasons to three straight winning seasons and saw the participation rates increase from 53 players to 122. He also helped numerous players to play in college, including one drafted in the NFL. Corona taught social studies and handled all strength/conditioning and study hall duties at Bishop O’Connell.

"I'm beyond excited to join St. Joe's,” Corona said. “The football program has a lot of potential and the alumni base is large and incredibly supportive. I can't wait to get started building up both."

Before moving to the Catholic high school coaching ranks, Corona spent eight years at the college level working with every position on both sides of the ball. Most recently, he spent three years at the University of Findlay (Ohio), a Division II school, where he worked with the defensive line, running backs and tackles/tight ends. He helped turn around a 1-9 team to one that went 6-4 with wins over nationally ranked Grand Valley State and Wayne State. He coached the DII Offensive Player of the Year and two players to All-Ohio and All-GLIAC Teams.

Corona spent one season at Pace University, a Division II university north of New York City where he coordinated the passing game and helped develop an All-Rookie team wide receiver and an All-League tight end. He spent three and a half years working in California junior colleges as an adjunct professor in kinesiology/strength and conditioning while coaching offensive line, linebackers, tight ends and quarterbacks. He also coordinated recruiting and handled academic oversight. He was fortunate to see numerous players go on to four-year colleges and the NFL. His first coaching job was at Sweet Home Middle School in Amherst, NY, under the late John Faller.

As alumni engagement officer, Corona will play a pivotal role in developing and maintaining relationships with St. Joe’s alumni by coordinating activities and events.

“Mike is a natural at building meaningful relationships. He has a proven track record developing relationships with alumni in his previous roles. This experience will allow him to build upon our rich tradition of alumni engagement,” said Dan Warner ‘06, Vice President of Institutional Advancement.