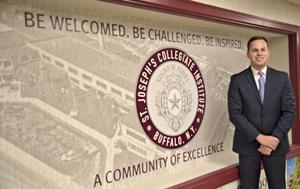 With significant experience in higher education, Warner joins the leadership team and Advancement Department of St. Joe's.
Dan Warner '06 has returned to St. Joe's in the role of Vice President of Institutional Advancement. He previously served as the Director of Advancement at the University at Buffalo's School of Engineering and Applied Sciences, and has been in the advancement industry since his graduation from Le Moyne College in 2010. Dan has held the positions of Development Associate, Assistant Director of Development, Major Gift Officer, and Leadership Gift Officer at Le Moyne College and later for four years at Canisius College. Warner received a Master of Education in Higher Education Administration from the University at Buffalo in 2012.

In addition to his work in advancement, Dan also serves on the board at St. Mark School in North Buffalo, serves on the Advancement Committee and chaired the 2019 Gala at NativityMiguel Middle School in Buffalo, serves as a board member on the Western New York Planned Giving Consortium, and serves on the leadership team of OneJesuitBuffalo. In his "free time," he volunteers for the Society of St. Vincent de Paul.

Dan is extremely excited to join the leadership team and Advancement Department at Joe's. He states, “As a graduate of St. Joe’s, I continue to maintain a passionate connection and affinity to the school and its Lasallian mission. I built friendships for life as a student, and the tenets of faith and brotherhood have influenced the continued formation of my values through adulthood. The opportunity to give-back to the school that gave me so much will be incredibly fulfilling.”
Print